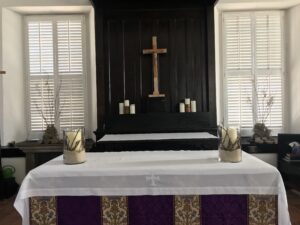 “He told those who were selling the doves,”‘Take these things out of here! Stop making my Father’s house a marketplace!’”

These words from the gospel according to St. John recall the familiar story of what is referred to as the Cleansing of the Temple. Jesus overturns the tables of the money-changers and throws out those who are selling animals for the sacrifices. Initially we might think Jesus found these Temple sacrifices and the money changing as abhorrent, but I am not certain that is the explanation. Jesus was a good Jew; he was raised by his family to go to the Temple and for all we know participated and accepted the traditions associated with the Temple. What offends Jesus is the misuse and abuse of those practices for personal gain.

The money-changers served a valid purpose in the operation of the Temple. The coin of the realm was a Roman coin which had pagan images on it. The Temple tax, which all Jews had to pay, was to be paid with Palestinian shekels so there were money-changers who exchanged the Roman coins for the Palestinian shekels. No problem, except the money-changers, knowing that the exchange had to be made, began charging exorbitant rates for the exchange and took advantage of those who were obligated to pay the Temple tax. The sellers of animals played a similar shell game. The animals to be sacrificed had to be pure and spotless. A Jewish peasant could bring his own animal for sacrifice but it was up to the priests of the Temple to decide the purity of the animal; quite often the priests found cuts and scratches on the animal the person owned and that animal failed to meet the standards. But guess what! The priests had a pen-full of animals and crates of pigeons that were pure and for a price could be purchased. And it was these patterns of behavior, the misuse and abuse of religious practices, that seem to have offended Jesus and compelled him to act with zeal in the cleansing of the Temple.

One of the learnings for us from this story, I believe, is that we need to be very careful about those ideas and beliefs we hold as being the appropriate religious response. All of us who spend any time thinking about connecting our religious beliefs with our daily behavior need constantly to evaluate and ask ourselves: Does my action represent a fair religious response, or is my action predicated upon a religious perception that itself has been predicated upon a personal, prejudicial opinion, thus using my prejudicial interpretation as a proof text for a religious belief? We can all pick and choose portions of Holy Scripture that sustain our personal faith statements, but there may be an equal selection of Scripture that would call our faith statements to account.

The church itself, as a body, has always made accommodations with the world around her. I believe, for example, our Lord was a pacifist and most first and second century Christians followed that path, so much so, that the Roman Empire was hesitant to have Christians in their armies. As time went by the church, through the final efforts of the Emperor Constantine in 325 AD, became the official religion of the Empire. The church made an accommodation with the empire and more and more Christians entered into the Roman legions. This transference of belief from a pacifist founder to an organization that participated in the sustainability of a secular empire, including the use of armed force, had to be explained.  An apology for such behavior had to be developed and thus in the fourth century we find St. Augustine of Hippo developing what we now refer to as “The Just War Theory.”  It is very possible that Jesus would have taken whips and chains to that theory.

My point is that we have no guarantee that the interpretative religious beliefs each of us hold are in fact what God would have us believe.  For some that may be scary, even an intolerable statement. But I would remind us of St. Paul’s statement when he wrote that we work out our salvation in fear and trembling, not because we fear God and tremble in the presence of the Holy, but because when we are most sound in our faith, we know that we do not know, with absolute certainty, God’s will for us in many circumstances.

We are called to the practice of religion, not the certainty of it. We come to worship in hope that God will touch us in new ways.  We offer our confessions because we know we are not yet whole.  We receive the sacrament so that God might sustain us and nourish us for another day or week. We leave this place hoping that God has touched us, healed us, sustained us in ways that open our hearts and our souls to the world around us, and yet we realize that we will have to return next Sunday because the practice of religion requires daily and weekly renewal.