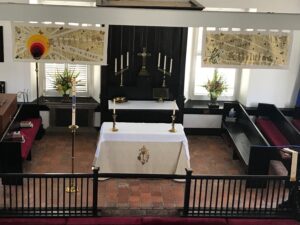 “They were startled and terrified, and thought that they were seeing a ghost.”

Three of the four Gospel writers tell the story of the resurrection of our Lord and then there are stories such as this week’s readings in Luke’s account of the Gospel that speak of post-resurrection experiences. The three resurrection stories presented in the Gospels do not have the same recollections about that first Easter Day and the post-resurrection stories present the presence of Jesus in various forms.  In fact, this week’s story indicated that they “were startled and terrified, and thought they were seeing a ghost.”   I am of the opinion that what we have in these stories are statements of faith and I want to speak to that interpretation for just a few moments.

The earliest of these writings occurred forty to fifty years after the death of Jesus. The chances are that the vast majority of those people who had experienced the most intimate moments with Jesus were deceased by the time of the stories being written down. The story tellers had written their material based upon the oral traditions that had been accumulating for two generations of Christian folk and so, as with any human remembrance, the stories came down colored by differing perspectives. Two things, however, came down with that oral tradition. The first was that they were convinced that Jesus was a special human being and that he had moved their forebears in the faith in ways that had made their lives whole and fulfilling. The second thing was that they were convinced within the depths of their being that this Jesus continues to live and was for them, and is for us, the magnificent path to wholeness and holiness in life. None of them had the full story about this Jesus nor what it meant to be in his presence, but they knew that he had moved them, changed them and loved them in a manner that was way, way beyond the norm. And it caused them, as it did the centurion who stood watching Jesus die on the cross to say, after looking at and experiencing the life and the presence of this person Jesus, surely this man is a Son of God.

We are the inheritors of that faith and belief. We are the people of the resurrection. It is we who are called to receive into our lives and share with others the reality that this Jesus moves us in exciting and challenging ways, that his presence amongst us can change our lives and the lives of those whom we touch, and that through his enormous love and caring for each of us individually, we in turn can be love bearers. People, who through our lives, our thoughts and our actions, show the world that that those who are sick can be healed, those who are fearful can receive strength to cope and persevere, those people and relationships that are estranged can be bridged, that love can overcome apathy and hatred and ultimately because of God’s love for every one of us, life will have the final victory over death.